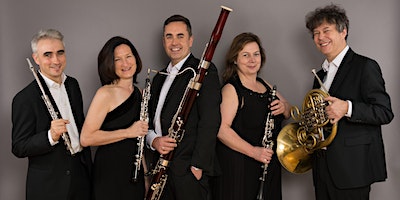 Wind quintet with a difference!

of chamber music with its innovative programmes. The members of the emsemble are delighted to begin their 20th year with a special Beethoven-inspired programme, celebrating the 250th anniversary of the composer’s birth.

Concert appearances have taken the NLCE all over the world. Highlights to date include performances in northern Sweden, for Courthouse Music, the Banff Festival in Canada,the Trasimeno Festival (Perugia) and Wigmore Hall, the Two Moors Festival performing Walton’s Façade with Prunella Scales and Timothy West, Saint-Saëns’ Carnival of the Animals at the Leeds International Concert Season, King’s Place, with composer/pianist Martin Butler, and premieres at the Cheltenham Festival in 2011 and 2014. Recently, the group have been featured on Classic FM, made a new film of Settala’s Machine by Philip Cashian, and headlined the Big Malarkey, a children’s literature festival. They are thrilled to be launching their anniversary tour at Arts for Hungerford – programme details will be announced nearer the time.